In the last 24 hours as I write this at 4pm GMT on a Sunday I have a had Mandinka “Griot” wailing outside my window and being one of the sounds of the Gambia it got me thinking about how different noise is here, compared to the first world.

When we lived in a line house in Serekunda

and I was new and fresh to Gambia, one night around 4am there was a scratching sound on the hot tin roof. I was needing the loo, but being outside meant facing Mr Scratchy on the roof. Too afraid to face the blackness and Mr Scratchy alone I woke Sol. Who couldn’t contain his mirth as Mr Scratchy was revealed to be a skanky ginger cat skulking on the roof in search of mice and other vermin for his feast, and not some African monster the darkness led me to believe was really there

When Sol was a kid, all of the area in which the tourist area is now located up to and beyond the area where most of the wealthy ex-pats now live and back again was all forest. Deforestation has ripped trees from their roots pan Gambia and left it dry, barren and hot. However, as building began to expand in the 80’s and 90’s most compounds tried to keep at least one tree for shade. The majority of these being mango trees, which is just fine if you love mango – I don’t. Mango trees are constantly shedding. In our winter it’s leaves, in March- May the fluff akin to blossom. From then on it is mangos. Pellets fall like rock hard bullets until the mango which ripen are harvested by fruit bats, who munch their way through as many mangoes they can, until the remains of their mango munchings fall onto the roof of the house. Boooom. Always in the middle of the night, with bats being nocturnal animals. We always hear the bats, a high pitched squeak as they fight for the juiciest mango as we lay awake listening to the sounds of the night. And awake to splattered squashed mango remains to clear every morning.

When the mango are not falling naturally to earth with a little help from the bats, the kids do their best to assist their journey from branch to belly. They find stones, sticks and rocks and throw these at the mango branches overhanging the wall, hoping to loosen them and eat their fill. Crack shots they are not and with their throwing come stones into the compound, hitting windows, and whatever else happens to be in the way.

They’ve gone now, but for a while our neighbours had a visitor as is common here. Our next door neighbours originate from Basse- the eastern most town in Gambia, where temperatures are regularly 40+ degrees. When part of the family moved to this area, known as the Kombos, other family members come and stay for extended visits, sometimes for several years. One of these visitors gave birth to twins while here. All babies cry, we know this. But these two cried and howled continually from day one until they returned to Basse over 15 months later. A high pitched wail, always at the crack of dawn, wah wah wah. Guests complained but short of gagging them there was little we could do. When in Rome……..

Noise carries further as people do not live inside their “houses, rooms etc” like Europeans, Gambians spend all of their waking hours outside, where there may be fresh air or a breeze as opposed to the darkness and stifling heat of a 10’ x 10’ room with no windows. They cook, clean the dishes, wash the clothes, mend the clothes, bath the babies, socialise and sit chewing on sticks from dawn until bedtime in the streets, in their compounds, in neighbours compounds. The only thing I can liken it to, is if all your street went into their gardens and held a BBQ every single day, the noise floating with the wind. 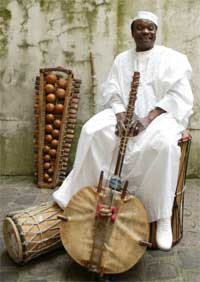 On the same theme of outdoor activities, weddings, naming ceremonies, wakes, gamot ( Islamic prayer meetings) and griot recitals. A griot is a record keeper, as until recently none of the Gambian tribes had any written format for their languages. Wolof is now being used as a written language but given a lot of words in Wolof start or contain NGH. NKG, KNG it is difficult to scribe and all modern words derive from the English language. Historically with no written language Tribal elders became the record keepers of that tribe or village’s details of who married who, who gave birth to who, which King did this who was the first to do that etc etc. These griots travel the country reciting tribal history and join any wedding, celebration they find, where guests are expected to give him a few dalassi. When the griot starts his tale telling , it is on a load speaker or megaphone in a local language with what appears no pause for breath. The sound reverberates on every solid surface for miles around.

Mandinkas are known to be grumpy in the morning until they’ve eaten their “porridge” a combination of maize, groundnut and sugar which is pounded in an enormous pestle and mortar made of wood. The rhythmic sound of the pestle grinding the porridge carries across the compounds at the break of each new day. Boom Boom Boom.

West African wrestling is a sport with traditions in tribal warfare. Wrestling was traditionally training for tribal warriors and over the millennia has become a national sport for Gambia and Senegal. Like sport the world over, kids emulate their elders and set up mini wrestling contests in a patch of empty land or an empty compound waiting to be built. The all contribute a few dalassi to hire a sound system, make an arena our of old rice sacks and youths from far and wide wrestle into the night. The sound of cheers and African drums echoing through the night.

Kankurang is a Gambian tribal deity with its roots in traditional belief systems long before Islam or Christianity found its way to Africa. Each tribe has its own, Jola have the Kumpo, Mandinka the Kankurang, Wolof the Zimba ( meaning Lion dance in Wolof). Traditionally these w

ere costumes privileged elders would don to protect the new born, the recently departed and the newly circumcised from evil spirits. These figures would appear at these times, dancing , wailing and clashing two cutlass together to ward off evil spirits. The theme remains, with newly circumcised boys, the parents pay a Kankurang to roam the local area warding of evil. Which is all very well until you’re woken by the clashing of cutlass and a demon pitched scream at 2am every night for two weeks. Originally a Kankurang would be dressed in tree bark and leaves and carry a machete and a stick with his whole body dyed orange. He performs a menacing dance while chasing out evil spirits. Kids mimic what they see and now shred old rice sacks and make masks and copy the Kankurang by tormenting anyone they can find.

Many Gambians survive by using donkeys to carry articles to and fro, charging a few dalassi per trip. The donkeys are tethered by the fetlock at night to prevent roaming. Most nights a braying donkey calls out to his kin and neighbours, reverberating through the night skies.

While Gambia tries to catch up with first world countries, the musical traditions are so steeped in the culture here, I doubt the nights will ever be without the sound of drums, griots and kankurangs. It is Africa after all and we cherish it for these cultures and traditions. But quiet is ain’t!